Tomorrow thousands of couples at venues across the UK will reaffirm their wedding vows simultaneously at 5:15pm for The Big Promise world record attempt as part of Marriage Week 2014.

The couples taking part in The BIG Promise event, launched in the Houses of Parliament during Marriage Week 2013, hope to break the current world record of 1089 couples renewing their vows which was set in the US in 2009.

“The thought of thousands of couples from Newquay to Orkney saying together ‘We will!’ is just fantastic. The occasion will be both serious and huge fun – a bit like marriage really!”

“Marriage Week has always stood for encouraging and thanking couples for all that marriage means for them and for society. This year we really want people to celebrate just how important the promises we make are. They offer the foundation for a stable and loving family; what we build on that foundation is up to us, but we want people all over the country to join with us and send out the message: ‘these promises matter’!”

Time for Marriage has many team couples involved in this exciting project – hosting the ceremony in their churches and/or taking part themselves!

“We have been married 21 years and reaffirmed our marriage vows at our first Time for Marriage weekend 11 years ago.  This impacted our marriage significantly as we celebrated all God had done and is doing in our relationship – both the highs and the lows!”.

One couple taking part will celebrate fifty years of marriage together on the day of The Big Promise! Tom and Doreen Shaw from Sheffield will join with their friends, community and family to reaffirm their vows on their golden wedding anniversary at The Rock Christian Centre in Sheffield.

“We started out with nothing but our marriage wasn’t built on what we had, rather on who we were. Marriage has made us better people I hope. We are so excited to celebrate 50 years together on the same day as The Big Promise.”

Couples can still sign up to be a part of the world record attempt by finding a participating venue onThe BIG Promise website or by registering a new venue themselves.

Check out our Marriage Week page for more info. 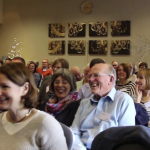