We’re delighted to have our wonderful facilitators, Pete & Faith Scurr share with us their 50 years of marriage.

I have to say, as our fiftieth Wedding Anniversary looms up, we can’t believe how the years have gone by so quickly.

Faith and I first set eyes on each other at a Royal Naval Ball, in the Royal Naval Hospital Stonehouse, Plymouth. There was an immediate attraction but we didn’t date until almost a year later. Service life was new to Faith as she was just starting training as a SEN Naval Nurse, and I was soon to be drafted out from the Hospital  to a Commando unit heading for exercises in Europe and then on for a tour of duty in Northern Ireland.

Our courting was interrupted by my Unit’s deployment to Malta in1971. We would write to each other on a daily basis. No mobile phones in those days. As we look back on those times, this period of separation did cause the heart to grow fonder. Putting our feelings down on paper and sharing them with each other, undoubtedly helped to develop a lasting bond of friendship and commitment which goes on to this day.

The difficulties in our relationship became more apparent once married and living in Malta together. Faith was working in a Services Family Clinic in Valletta and I in a camp near St George’s Bay. We lived in a ground floor flat in Mosta amongst Maltese families.

The Unit was often away on exercise, so Faith was left very much on her own. The separations cause sad departures but great “reunions”. Learning to adapt to married life in this scenario was not easy. I had to learn to give up my “Singleman’s lifestyle”, in a service where the “BUDDY BUDDY  SYSTEM”, was part of the culture and success of the Royal  Marines “Esprit  de Corps”. This was not easy to breakout of. Faith was very straight with me in this matter, she pointed out to me what she understood marriage to be about. If I wanted a happy marriage I had to change my thinking and learn to relate to my RN & RM colleagues in a different way.

The early years of our marriage, with its trials and tribulations, has grounded us in the need to appreciate each other’s positions and points of views.

The icing on the cake for our marriage was when we attended a Time for Marriage weekend, known then as a “Marriage Enhancement Weekend”.

We had been Christians  for only four years and married for ten, at that time.   The weekend strengthened  our relationship as we invited Jesus into our marriage.

The sermon spoken at our wedding then made sense.  The vicar spoke on Ecclesiastes 4:12 “Though one may be overpowered, two can defend themselves. A cord of three strands is not quickly broken.”  Jesus was and is an essential part of our lives.

Our top tips for a lasting marriage 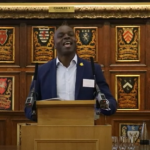